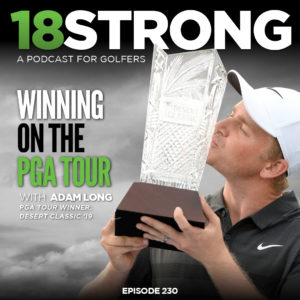 Once again, we have our buddy Adam Long, PGA tour Player AND Winner, joining us on this week’s show. You might remember that we had Adam on this past September on Episode 207  just after he secured his PGA Tour Card from finishing top 25 in the Web.com tour.

We chatted about what his expectations were, how he was preparing for his upcoming rookie season on the PGA Tour, and what his goals were.

Well now with a PGA win under his belt, he’ll be playing in both the Masters and PGA Championship and his whole world of golf has changed thanks to his rounds at the Desert Classic, besting the likes of Adam Hadwin and Phil Mickelson with a birdie on 18 to get his first PGA Tour win.

This time, Adam is on to talk about his big win, how life has changed since his whirlwind of a time getting into the PGA, and how he is prepping for the next big events. It’s rare that we get such an inside look from a player behind the scenes at what’s going on so I know you will enjoy this interview.