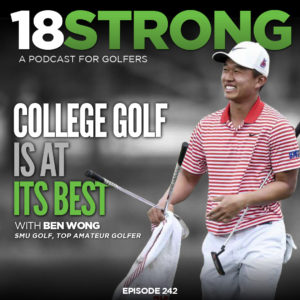 Today I am especially excited to have on our special guest, SMU Golfer and one of the top amateur golfers in the game, Ben Wong.

We had the chance to see a lot of Ben at the NCAA finals this past year (where he played his final match against Oklahoma State’s Victor Hovland who recently turned professional) and today we get to sit down with Ben to hear his journey from Hong Kong, to Beijing, and eventually landing in Texas.

Since the age of six, Ben began traveling to the United States playing junior golf before moving to Texas to pursue a high-level junior, amateur, and eventually collegiate golf career.   He now finds himself in the line-up of one of the premier collegiate programs at SMU and like many of the top collegiate players of today, has his sights set on an eventual run for the PGA Tour.

In today’s interview, Ben walks us through his game, what the NCAA finals were like from his perspective, and what he predicts for not only his future, but the game of golf in general.

What’s you’re walk up song to the first tee at Sweetens Cove?  Wake Me Up by Avici

If you could pick one person to play 18 holes of golf with, who would it be and where would you play?

Any last piece of advice for the 18Strong audience?   People get too caught up in the end goal, you have to focus on learning and enjoy yourself.

Where to find Ben:

SuperSpeed Golf  use the code “18STRONG”