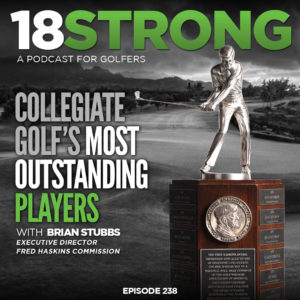 Today I am especially excited to have on our special guest, Brian Stubbs.

I don’t know if you’ve noticed but over the last few years, it seems like collegiate golf has been exploding and getting a lot more coverage and attention. There are some incredible players coming through the ranks and into the pros, which is why this week we are talking with Brian Stubbs, the Executive Director of the Fred Haskins Commission.

We’re going to talk about the history of the Haskins Award and the Annika Award, which are basically the Heisman equivalents for collegiate men and women golfers.  These awards are presented annually to the most outstanding player, voted on by the peers, mentors, and coaches. Today Brian is on to talk about not only the history of the awards and their meaning to the players but also collegiate golf as a whole.

If you could pick one person to play 18 holes of golf with, who would it be and where would you play?  My father at Lahinch

Any last piece of advice for the 18Strong audience?   Remain positive, present, and clear-headed to see success both on the golf course and in life.

Find out more about the Haskins and Annika Awards at:

SuperSpeed Golf use the code “18STRONG”