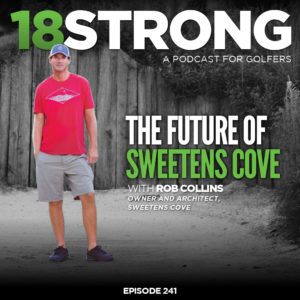 Rob Collins is the course designer, architect, and ultimately, the inspiration behind Sweetens Cove. If you haven’t heard of Sweetens Cove yet, you’re about to be introduced to the story of an incredible little 9-hole course near Chattanooga Tennessee (South Pittsburgh) that has taken the world of golf by storm.  But it wasn’t always smooth sailing for what many may simply think was an “overnight success.”

After years of struggling to keep the place open, Sweetens has quickly become one of the most talked about tracks in golf and is now considered one of the top-ranked courses in the United States (and remember, it’s only 9 holes!).

Rob’s shares the highs and lows of the journey, how the golf experience at Sweetens is different from any other course (so much so that it has developed a cult following) and what’s next for “The Little Course That Could.”

What’s you’re walk up song to the first tee at Sweetens Cove?  Shoot the Singer by Pavement

If you could pick one person to play 18 holes of golf with, who would it be and where would you play? My dad at Augusta National

Any last piece of advice for the 18Strong audience?   I think there is a movement in golf where it is more about having fun over your score and your swing: just go out and have a good time.

Find out more about Rob and Sweetens Cove at: