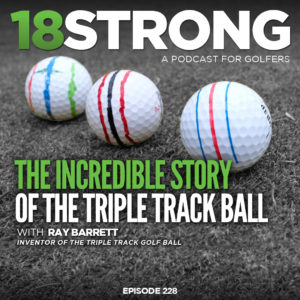 Even if you’ve never heard of the Triple Track™ before, I bet you’ve seen it. Recently we’ve seen Phil Mickelson using a Callaway golf ball that has three little lines on it, to which he has attributed a significant improvement in his putting game.

Every new golf ball that comes out on the market touts the same mediocre changes that make it “unique and better,” be it spin, feel, distance, etc. But, with the Triple Track, it’s NOT ABOUT THE BALL at all, but what is ON THE BALL!

And as fascinating as the technology on the ball is, I believe it’s the story behind the ball and it’s inventor, Ray Barrett, that you are going to find most interesting and entertaining in this episode.  After successfully building and selling 2 companies, Ray virtually stumbled upon the idea in a simple attempt to see the ball better when playing with his buddies, and thanks to his big vision and persistence, it is now being sold all over the world via Callaway Golf and is winning championships on the PGA Tour.

What is your walk-up song to the first tee-box? Hallelujah by Jeff Buckley

If you could play 18 holes with anyone in the world, who would it be and where would you play?  Jennifer Lopez

Any Last Piece of Advice?

Everyone has the ability to be an entrepreneur and there are so many opportunities to let your ideas grow.

Article talking about TripleTrack and Phil Mickelson’s success using it