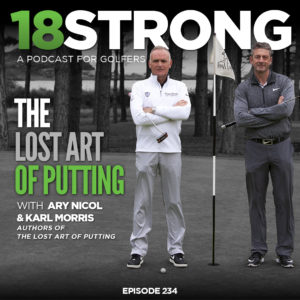 Today I am especially excited to have on our special guests, authors of the fantastic book The Lost Art of Putting, Gary Nicol and Karl Morris.

When I first read the book “The Lost Art of Putting,” it was completely different than what I imagined a book on putting would be.  As you would imagine, I anticipated the text would entail an excessive amount of technical conversation on putting, styles, techniques, etc. however, it is refreshingly the exact opposite of what I expected. In my talk today with the authors, Gary Nicol and Karl Morris, we dive into the mental game, attention, and the art of not just putting, but golf altogether. These two world-class coaches explain in more ways than one how the most effective and long term strategies to becoming a great putter rely very little on the actual technical side of the equation, but depend more on your understanding of pace and your personal belief in yourself as a great putter.

What’s you’re walk up song to the tee box?

If you could pick one person to play 18 holes of golf with, who would it be and where would you play?

Any last piece of advice for the 18Strong audience?

Karl: Be grateful for every opportunity you have to golf.

Gary: Pay more attention to what the golf ball has to do.

Find more information on Gary Nicol and Karl Morris and at: