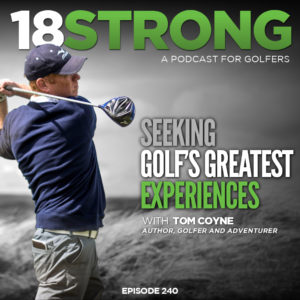 Today I am especially excited to have on our special guest, Tom Coyne.

Tom is much more than a golf writer; yes, he’s written multiple best-selling golf books and has many contributions to golf publications, but I consider Tom a Golf Adventurer.

He’s a guy that loves the game so much and is willing to do the extremes when it comes to his journeys in golf and thanks to his willingness to do a deep dive into these crazy adventures, we all learn more about the heart, soul, and history of this game we love.

It wasn’t until recently that I found Tom’s work and came to find out that he is on a new journey across the States playing an insane amount of golf for his next book A Course Called America.

In this episode, we not only get into the details of this latest endeavor but also his previous books A Course Called Ireland and A Course Called Scotland, and the amazing insights he has gleaned into the heart and soul of the game and stories around the game of golf.

What’s you’re walk up song?  Baba O’Riley by The Who

If you could pick TWO people to play 18 holes of golf with, who would it be and where would you play in both Ireland and Scottland?  My Dad and Tiger or Rory McIlroy at Carne in Belmullet (Ireland) and Askernish (Scottland)

Any last piece of advice for the 18Strong audience?   Be present when you’re golfing, the game gives you the opportunity to be in the moment that rarely comes in the rest of our lives.

Find out more about Tom at:

SuperSpeed Golf  use the code “18STRONG”